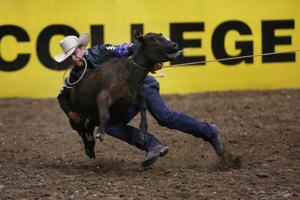 Julian has been across the country and seen several rodeos, but for some reason, the college finals environment got to the 11-year-old horse. Murphy pointed out, rodeo is a dangerous game, but CNFR is a heck of an atmosphere.

“I might go to The Beacon,” Murphy said when asked how he was going to celebrate. “But it might be a short night.”

Because the 2021 CNFR tie-down roping champ is already on to the next one, there’s a rodeo in Evergreen, Colorado, and Murphy wants to prove his mettle.

Speaking of more rodeos, the 2021 steer wrestling champion, Gavin Soileau, had just been crowned a college finals champion. And instead of celebrating at The Beacon like Murphy, the responsible cowboy gets an early night’s rest to catch an early morning flight tomorrow.

Soileau jumped out of the chute right after the steer left the pen. As soon as he got the steer’s horns, Soileau threw himself backward as if he was free-falling off a building.

The steer complied and went down in pro wrestling fashion.

His fellow competitors Arnold Walt and Pacean Deleeuw, the second and third-ranked bulldoggers heading into the final go, failed to record scores on Saturday.