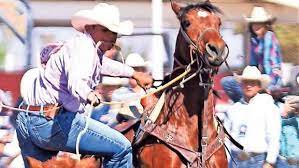 The representatives of Chihuahua took advantage of the house and took five of seven finals in the open category of the National Rodeo Championship, which is based in the city of Chihuahua.

This Saturday the finals of the year 2020 were held since they could not be carried out in time due to the Covid-19 pandemic. The action was in the arena of the Ávalos complex, where the Santa Rita Fair takes place annually.

The party was started by the international Héctor González, who showed off his renowned quality and took the title in the luck of horse riding with petals.

Another well-known cowboy, the experienced Víctor Hugo Bañuelos, took the gold buckle on the calf lasso, while Carlos Ochoa Crosby became the bullfighter champion, giving the locals a three-for-three.

In horse riding with saddle, there was no winner, since no cowboy could give the regulation eight seconds, so the 2020 title was considered void.

The great Chihuahuan performance was completed by Natalia Loya in the barrel race, with a time of 18.067 seconds, which was the best of the day, and won the gold buckle.

In a tie in pairs, the victory went to the representatives of Nuevo León, with Héctor and Antonio Chapa as head and picador respectively, two competitors who already have experience in rodeos here in Chihuahua.

Finally, in bull riding, Álvaro Álvarez from Jalisco, wearing the colors of Cuernos Chuecos, smashed the competition, and with 86.7 points in his final mount, he was credited as champion. Álvarez comes from participating in the Professional Bull Riders (PBR) finals recently.

In the Senior Youth category, there were also titles for Chihuahua with Annie Trejo and Camilo Ríos. Trejo was crowned in the race between the poles, while Ríos, already a professional cowboy and who competes in the United States, took the title in the calf tie.

Darianne Romo, from Sonora, was the best in the barrel race, while Alberto Sánchez from Coahuila won the bullfighting. Antonio Rangel, from Aguascalientes, is the champion in bull riding.

This Sunday will be the finals of the 2021 edition of this National Rodeo Championship, starting at 4:00 p.m., although the youth have their competitions at 11:00 a.m.