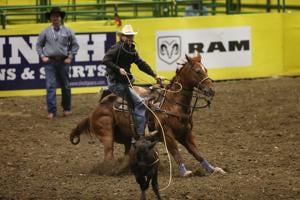 His horse, Waylon, is 14 years old, strong, and easy-going. After King ropes his calf and jumps off Waylon to complete the tie, Waylon backs up and pulls back to keep the rope tight.

The previous owner thought otherwise, however.

“He said it was the most hated horse he’s ever had. He hated him more than any other horse,” King said about the preceding owner.

“I thought it was kind of funny, because I was like, ‘Oh, it’s the best horse I’ve ever bought.’” But it just shows you that different people like different horses.”

Garrett Elmore says his 11-year-old horse is his best friend and the best he’s ever rode.

And he needed that kinship to tie the calf he drew on Wednesday night.

By talking to Cooper Slavin, another competitor, he knew the calf was strong, so Elmore needed to be close to the barrier to get a quick burst.

“I got him tied around the neck, slowed him down, and did my job,” the Western Oklahoma State College competitor said after achieving the fastest time of the night with a 9.7-second run.

Elmore has positioned himself into fifth place in the average after a disappointing 18.2 in the first go-round.

He quickly rebounded in the second go-round with a 9.2 and has capitalized on his momentum.