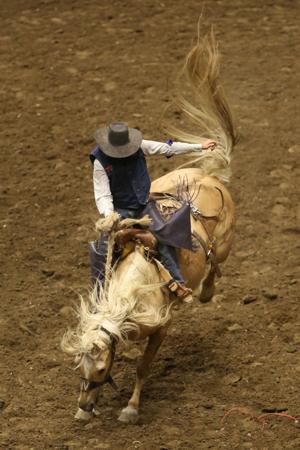 The score moved Mebane into fifth in the average at 143.0 points on three head. Southwestern Oklahoma State’s Timothy Troyer (69.5) and Tennessee-Martin’s Tyler Pruitt (65.5) moved into seventh and eighth, respectively, after turning in the only other qualifying rides Wednesday.

The top 12 will advance to Saturday’s short round. With more riders getting their shot at the third go-round Thursday, Mebane is hoping his average will be good enough to get him to the weekend.

“If not, all I can do is come back next year and try a little harder,” Mebane said. “And there are more rodeos to go to, so the college finals isn’t the end of the world. But it’s definitely one of my favorite rodeos so far.”

After scoring in the high 70s on each of his first two rides, the freshman from Panola College rode his horse, Storm Valley, to an 83 on Wednesday, the highest score of the third go-round to this point. It moved him 5.5 points past Western Texas College’s Dean Thompson, who led the average after the first two go-rounds and scored a 74 in the third.

“I knew the horse, and I knew some buddies had been on him at some pro shows,” Dement said. “I couldn’t wait. He was a good one to get high scores on. I capitalized on what I needed to do, and that’s what I did.”